(codenamed Whistler 2000-2001) is a personal computer operating system produced by Microsoft as part of the Windows NT family of operating systems. Windows XP was officially released to manufacturing on August 24, 2001, and generally released for retail sale on October 25, 2001. The name "XP" is short for "eXPerience", highlighting the enhanced user experience.

Windows XP was the first Windows NT kernel-based OS designed for both the business and general consumer markets, and was much more stable than the Windows 9x line due to the improved codebase (heavily based on Windows 2000). It was also the first version of Windows to implement product activation to prevent piracy. Windows XP was also a major advance from the MS-DOS based versions of Windows in security, stability, and efficiency due to its use of Windows NT. Windows XP runs on 32-bit (i386/x86), 64-bit (amd64/x64), and Itanium (ia64) machines.

In the late 1990s, development of a new OS began, and during this time it was codenamed "Neptune". Neptune was based on the Windows NT kernel, but was made specifically for home users. An updated version of Windows 2000 called "Odyssey" was also planned for the business market. However, in January 2000, both projects were shelved in favor of a single OS codenamed "Whistler", which would serve as a single platform for both home consumers and businesses alike. As Whistler was developed, it was renamed to "Windows XP".

Upon its release, Windows XP received mostly positive reviews from critics. Critics generally noted the increased performance of Windows XP, especially in comparison to Windows Me, and that it had a more intuitive user interface, improved hardware support, and expanded multimedia capabilities, although it was not free from criticism at the time of its release. Many users had criticized the new licensing model and the product activation system, as well as its many security flaws and zero-days upon its release. However, after Service Pack 2 was released, Windows XP received critical acclaim from many users and critics. It is estimated that over 400 million copies of Windows XP were sold during its first five years of availability and that at least one billion copies were sold by April 2014.

Windows XP was an extremely popular operating system and remained popular even after the release of newer versions, particularly due to the poor reception of its successor, Windows Vista. Windows 7 finally took over XP's market share at the end of 2011 only to have it taken over by Windows 10 just 6 years later compared to XP's 10 years. Part of its popularity was also due to its extremely minimal system requirements; Windows XP can start on 32 MB of RAM (although 64 MB was the recommended minimum), and run smoothly with just 128 MB of RAM. Windows XP has the second most variants of any Microsoft operating system ever (just behind Windows 7). Windows XP was so popular that its default background, Bliss, became the most viewed photograph in the world after its release was like the painting from 1996.

Bootup on first time use.

Windows logo screen in all versions after installing SP2. 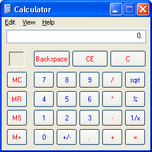 The Calculator as seen in Windows XP.

The Taskbar as seen in Windows XP Professional