Windows Automated Installation Kit is a collection of tools and technologies created by Microsoft, which were designed to help in the deployment of Windows. It was first demonstrated on Windows Vista.

Windows AIK Version 1.1 was released with Windows Vista SP1 (and Windows Server 2008). A large number of new tools were presented, including PostReflect and VSP1Cln. The ability to configure WinPE 2.1 has significantly expanded. 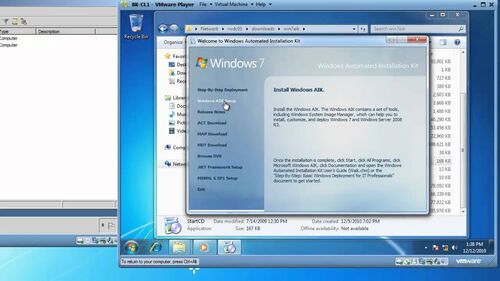 Windows AIK Version 2.0 was released with Windows 7 beta. Significantly, the new tool, DISM, assumed the functions of several earlier tools, including PEImg and IntlCfg, which were subject to criticism. The new WinPE 3.0 has a new feature - AeroSnaps, introduced for Windows 7. The User State Migration Tool (USMT) has also been added to WAIK.

Windows AIK Version 3.0 was released on 06/08/2009 with Windows 7 SP1 (and Windows Server 2008 R2 SP1) and an additional Windows Automated Installation Kit (AIK) for Windows 7 Service Pack 1 (SP1) was released on February 21, 2011, which is an optional update AIK for Windows 7, which helps you install, configure, and deploy the operating systems of the Microsoft Windows® 7 and SP1 families and Windows Server® 2008 R2 with Service Pack 1 (SP1).

Retrieved from "https://microsoft.fandom.com/wiki/Windows_Automated_Installation_Kit?oldid=17910"
Community content is available under CC-BY-SA unless otherwise noted.