Not supported as of January 12, 2016.
Users must install Windows 8.1 in order to continue receiving updates and support until January 10, 2023.

Windows 8 is an operating system produced by Microsoft for use on personal computers, including home and business desktops, laptops, and tablets. It is part of the Windows NT family of operating systems, succeeds Windows 7 and precedes Windows 8.1 and Windows 10.

Development of this operating system started before the release of its predecessor in 2009. Its existence was first announced in January 2011 at Consumer Electronics Show. During its development and test phases, Microsoft released three pre-release versions: Developer Preview (September 13, 2011), Consumer Preview (February 29, 2012), and Release Preview (May 31, 2012). On August 1, 2012, Windows 8 graduated from the development stage and was released to manufacturing. Windows 8 was slated for general availability on October 26, 2012.

Windows 8 is built based on Metro design language and introduces a new form of "Windows 8-style software", which may only be obtained through Windows Store. Windows 8 also features a new start screen, Internet Explorer 10, native support for USB 3.0, a new Windows Defender that combats malware (instead of only spyware), Windows To Go, and support for UEFI SecureBoot. The last of these has stirred controversy.

Windows 8 was available in four major editions: Windows 8, Windows 8 Professional, Windows 8 Enterprise, and Windows RT 8, Windows Phone 8. The first three had almost the same hardware requirements as that of Windows 7. The latter, however, ran on tablet computers with ARM architecture and had different hardware requirements. Hardware vendors willing to receive Microsoft's certification for such devices needed to adhere to a list of certification requirements. Windows 8 Enterprise and Windows RT were not made available at retail outlets.

Windows 8 development started before Windows 7 had shipped[1] in 2009. In January 2011, at the Consumer Electronics Show (CES), that Microsoft announced that Windows 8 would be adding support for ARM microprocessors in addition to the x86 microprocessors from Intel, AMD and VIA.[2][3] On June 1, 2011, Microsoft officially unveiled Windows 8's new user interface as well as additional features at the Taipei Computex 2011 in Taipei (Taiwan) by Mike Angiulo and at the D9 conference in California (United States) by Julie Larson-Green and Microsoft's Windows President Steven Sinofsky.[4][5] A month before the BUILD conference was held, Microsoft opened a new blog called "Building Windows 8" for users and developers on August 15, 2011.[6]

Microsoft unveiled new Windows 8 features and improvements on the first day of the BUILD conference on September 13, 2011.[7] Microsoft also released the Windows Developer Preview (build 8102) of Windows 8 the same day, which included SDKs and developer tools (such as Visual Studio Express and Expression Blend) for developing applications for Windows 8's new interface.[8] According to Microsoft, there were more than 500,000 downloads of the developer preview within the first 12 hours of its release.[9] The Developer Preview also introduced the Start screen. The Start button in the desktop opened the Start screen instead of the Start menu.

On 29 February 2012, Microsoft released Windows 8 Consumer Preview, the beta version of Windows 8, build 8250. For the first time since Windows 95, the Start button is no longer present on the taskbar, though the Start screen is still triggered by clicking the bottom-left corner of the screen and by clicking Start on the Charm bar.[11] Windows president Steven Sinofsky said more than 100,000 changes had been made since the developer version went public.[11] The day after its release, Windows 8 Consumer Preview had been downloaded over one million times.[12][13] Like the Developer Preview, the Consumer Preview is set to expire on January 15, 2013 and expired. People were not happy about the new Metro UI, and the fact that it had no start button.

Relatively few changes were made from the Release Preview to the final version. A tutorial explaining how to use the new Metro interface was included and the look and feel of the desktop was subtly changed to be more in line with the Metro interface. Some Microsoft developed apps were also changed slightly.[26]

Applications developed for this new environment were previously referred to as "Metro-style apps" in development materials, connecting it to Windows 8's use of a interface following the Metro design language as its primary desktop. However, reports surfaced that due to potential trademark issues with the German company Metro AG, Microsoft officials had begun to advise its Windows developers to stop using the term. A Microsoft spokesperson however, denied these reports and stated that the use of the term "Metro" to describe these apps was merely a codename that would be phased out.[30] Following these reports, Microsoft started using "Modern UI Style" to refer to its tile-based interface and design language.[31]

PowerShell is Microsoft's strategic task automation platform and a core component of the overall management framework for Windows. Version 3 has been in beta for some time but the final version is included with Windows 8 (and Windows Server 2012 which has also been released to manufacturing).

Lots of features have been removed in Windows 8, like the traditional Start menu. Support for playing DVD-Video has been removed from Windows Media Player due to the cost of licensing the necessary decoders and the prevalence of streaming services such as Netflix. For the same reasons, Windows Media Center is not included by default on Windows 8, but Windows Media Center and DVD playback support can be purchased in the "Professional Pack" (which upgrades the system to Windows 8 Professional) or "Media Center Pack" add-on for Windows 8 Professional. As with prior versions, third-party DVD player software can still be used to enable DVD playback.

The minimum system requirements for Windows 8 Enterprise edition are slightly higher than those of Windows 7.[54]

To receive logo certification, Microsoft requires that a system resume from standby in 2 seconds or less on x86 systems.[58]

Microsoft released minimum hardware requirements for new tablet and convertible devices designed for Windows 8, and defined a convertible form factor as a standalone device that combines the PC, display and rechargeable power source with a mechanically attached keyboard and pointing device in a single chassis. A convertible can be transformed into a tablet where the attached input devices are hidden or removed leaving the display as the only input mechanism.[59][60]

Hardware makers who choose the optional Microsoft Certification will be required to implement UEFI secure boot. Microsoft will also require that manufacturers offer the ability to turn off the secure boot feature on x86 hardware,[67] but they must not offer such an option on ARM hardware. No mandate is made regarding the installation of third-party certificates that would enable running alternative software.[68][69][70]

In September 2011, Matthew Garrett, an employee of competitor Red Hat, raised the possible risk of Microsoft locking out alternative systems,[71] leading to media coverage.[72][73][74][75] Microsoft addressed the issue in a blog post,[76] stating that "At the end of the day, the customer is in control of their PC. Microsoft’s philosophy is to provide customers with the best experience first, and allow them to make decisions themselves",[77] with the promise that disabling SecureBoot on Windows 8 devices would be possible.[78][79][80][81] In January 2012, Microsoft released certification requirements for Windows 8 specifying that non-ARM devices must have "the ability to disable Secure Boot", whereas for ARM-based devices, disabling Secure Boot "must not be possible."[64][67][82][83][84] By prohibiting Windows 8 from running on ARM systems that allow the user to disable Secure Boot, Microsoft raised concerns,[85][86][87] particularly in the Linux community, who are concerned that this marks an attempt by Microsoft to exclude competing operating systems from computers built to be compatible with Windows 8.[88][89][90]

Fedora Linux, in order to get around secure boot for their upcoming release, purchased a security key from VeriSign at a discounted price of US$99 through the Windows Dev Center,[91][92][93] causing some controversy in the Fedora community.[94] The Free Software Foundation has commented on the issue,[95][96][97] covering the use of GRUB and both Ubuntu and Fedora's approaches.[98]

Windows RT, a version of Windows 8 for systems with ARM processors, will only support applications included with the system (such as a special version of Office 2013), supplied through Windows Update, or applications acquired through the Windows Store. Windows on ARM will not support running, emulating, or porting existing x86/64 desktop applications to ensure the quality of apps available on ARM.[99]

Metro-style applications can either be cross-compatible between Windows 8 and Windows RT, or compiled to support a specific architecture.[100]

In none of Microsoft's announcements or confirmations of these promotional prices did it specify what will be the long-term, permanent upgrade pricing for Windows 8 and Windows 8 Professional.

The Windows 8 Professional upgrade for Windows 7 users will be easiest and most seamless of the upgrade paths because all user settings, personal files, and apps remain intact. For those upgrading from Windows Vista, only user settings and personal files are preserved, but not apps; and for those upgrading from Windows XP, only personal files (but not user settings or apps) will survive. Apps which do not survive may, however, be reinstalled (assuming user still has all installation files and/or media, and authentication/registration codes/keys and/or serial numbers).[104]

Those who purchase qualifying Windows 7 PCs between June 2, 2012 and January 31, 2013 will be eligible to register and download an upgrade to Windows 8 Professional, via the Windows Upgrade Offer website, for $14.99, through February 28, 2013.[101] A qualified PC is a new PC purchased during the aforementioned June 2 through January 31 promotional period with a valid Windows 7 OEM Certificate of Authenticity and product key for, and preinstalled with, the following editions:[105]

The Windows 7 Starter and Enterprise editions are ineligible for the US $14.99 upgrade. The upgrade must be performed via registration on the Microsoft Windows Upgrade Offer website. After registration on the site (which must be done from the eligible PC so that its copy of Windows 7 may be validated), registrants will receive a confirmation email. Then, after Windows 8's general release, said customers will receive another email with a promotion code and instructions for purchasing and downloading the Windows 8 Professional upgrade; which promotion code will be redeemed during the upgrade ordering process to receive the promotional $14.99 price.[105]

An optional installation DVD will also be available for an additional fee (likely $15, plus shipping and handling, based on what the downloadable $39.99 upgrades have been told they'll pay for one); or those who download the Windows 8 Professional upgrade will be able to create their own bootable installation media on DVD or USB flash drive from the downloaded Windows 8 Professional upgrade.[105]

The Windows 8 Professional upgrades obtained via these promotional prices will include 90-days of no-charge support from Microsoft which will begin at the moment the Windows 8 is installed and activation is completed.[105] 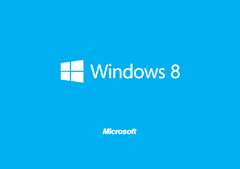 On February 18, 2012, Microsoft confirmed that in Windows 8 the Windows logo will be significantly updated to reflect the new Metro design language. The logo was designed by Pentagram partner Paula Scher. The formerly flag-shaped logo has been transformed into four window panes, perspective was added, and the entire logo will be rendered in a single solid color, which will depend on the user's personalization changes.[106]

Mainstream support for Windows 8 ended on January 12, 2016. Users are required to upgrade to Windows 8.1 to continue receiving extended support, which will end on January 10, 2023.[108]