Windows 1.0 is a graphical operating environment designed for personal computers, developed by Microsoft. Released on November 6, 1985, Windows 1.0 is the first version of the Microsoft Windows line of user interface environments and operating systems. It runs as a graphical, 16-bit multi-tasking shell on top of an existing MS-DOS installation, allowing for the usage of both existing MS-DOS software and graphical programs designed for Windows.

Critics reviewed Windows 1.0 poorly, feeling that it did not meet their expectations; in particular, they raised concerns about the lack of resources for new users as well as performance issues, especially on systems with lower hardware specifications. In spite of these criticisms, there were positive responses to early presentations and support from a number of hardware and software makers.

On December 31, 2001, Microsoft declared Windows 1.0 obsolete and stopped providing support and updates for it.

Windows 1.01 startup screen (when you type "win" in command screen) 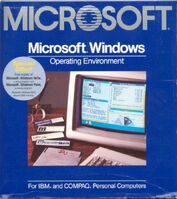